In November I visited Iraq where I met Iraqi Christian internally displaced persons living in Erbil. I met with a number of families from Mosul, Quaragosh, Karamless, and Bartallah that have fled Daesh. I also met with several NGOs helping Christians in the Middle East, including SOS Chretiens, a number of NGOs collecting the evidence of the Daesh atrocities, including Shlomo and Hammurabi Human Rights Organisations, and a number of religious leaders.  Lastly, I visited some of the liberated areas: Quaragosh, Karamless, and Bartallah.

Those who stayed the last two years and three months still hope that they would be able to go back to their homes. However, I have seen their homes in Ninevah Plains and it seems that they will not be able to return anytime soon. The three towns I managed to visit: Quaragosh, Bartallah, and Karamless are destroyed. Daesh looted one house after another without leaving any stone unturned. The houses, churches, schools, and shops are looted, burnt down, and some contractually damaged. In every church that I have visited: crosses are broken, the statutes of Jesus and Holly Mary are destroyed, Holly Bibles and books burnt (see: speakupagainstgenocide.wordpress.com/blog/) . These pictures from the recently liberated areas send one and very clear message – Daesh specifically intended to destroy Christianity in the area and everything that Christianity is associated with. This is genocide.

It’s been over four weeks since some of the towns in Ninevah Plains have been liberated, however, there is still a lot of work before people will be able to go back and start rebuilding their lives. The Ninevah Plains Units are checking houses for explosives and Daesh tunnels, and making the safe houses. Some of the houses destroyed by Daesh would need to be checked whether their construction is safe and sound for people to live in. The Daesh tunnels would have to be sealed off. The list of necessary works goes on.

However, Ninevah Plains needs more than only reconstruction of the towns.  The persecuted minorities in Ninevah Plains need a guarantee that the atrocities committed by Daesh will never happen again. They need a guarantee that they will be safe in their homes and will not have to flee in the middle of the night yet again. They also need justice. Recognising the atrocities committed against Christians, Yazidis, and other minorities in Syria and Iraq as genocide is the first step towards the adequate administration of justice, reconciliation, and healing. The Daesh fighters must be prosecuted for their crimes amounting to genocide, crimes against humanity, and war crimes. The victims deserve justice and this justice is long overdue.

Ewelina Ochab serves as a legal counsel in Vienna, Austria for ADF International. Her interests include persecution of Christians worldwide, ISIS/Daesh genocide in Syria and Iraq, Boko Haram in West Africa and minorities in South Asia. She has presented reports in the United Nations Forum on Minority rights. Ewelina obtained a LL.B degree with honours at Kent university, UK and currently is She is a PhD candidate in International Law and Medical Ethics.  She also published a book on ISIS/Daesh genocide ‘Never Again: Legal Responses to a Broken Promise in the Middle East’ 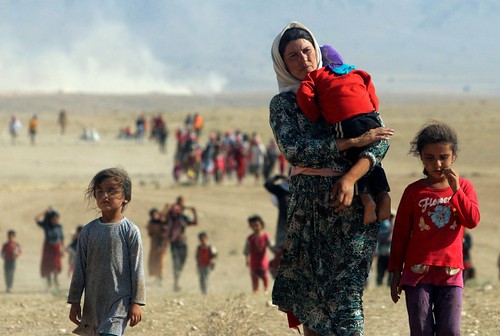 Blasphemy laws are instrument of oppression and persecution #FreeAasia

Will you stand for Aasia Bibi? A mother on death row in Pakistan over blasphemy?

Dedicate a tweet for a Christian mother on death row in Pakistan?

Why is justice a thing of past for minorities, a double jeopardy for all minorities in Pakistan?