PRESS RELEASE FOR IMMEDIATE USE

(Glasgow: UK) A Scotland-based minority rights group is calling for ‘Group Recognition Status’ for Christians fleeing persecution from Pakistan and seeking sanctuary in the United Kingdom will ultimately be at ‘risk of persecution’ if sent back to Pakistan.

The call for ‘Group Recognition Status’ recommendation was made in light of the recent decision in AK and SK (Christians: risk) Pakistan CG [2014] UKUT 569 (IAC) with reference to UNHRC guidelines on international protection Religion-Based Refugee Claims under Article 1A (2) of the 1951 Convention and/or the 1967 Protocol relating to the Status of Refugees, The International Covenant on Civil and Political Rights (ICCPR) and The International Covenant on Economic, Social and Political Rights (ICESCR).

‘It is utterly ridiculous that UK Government believes Christians are not persecuted in Pakistan if Christians are burnt to ashes in the brick kiln, their houses are chemically bombed, they are shot and poisoned in the police custody. What else counts for persecution’ said GMA’s Chairperson Mannassi Bernard.

‘You cannot make a policy out of a single case you need to consider the plight of Christians in Pakistan holistically and case by case on its merit’ stressed Mr Bernard.

Last month GMA was invited to be part of hearing sessions convened by the All Party Parliamentary Group (APPG) on International Religious Freedom and Belief on the 10 and 11 of November, 2015 chaired by Lord David Alton, in the Houses of Parliament attended by some 20 representatives of various organisations working for minority rights across the UK. GMA’s delegates provided the evidence of persecution of all minorities and expressed GMA’s concern for the safety of minorities’ due to the fragile political, economic and judicial infrastructure which is often used to target the vulnerable minorities of Pakistan.

Following the hearing sessions in London, GMA has compiled the recommendations for the UK government to revisit its policy towards persecuted Christians from Pakistan to consider them under ‘Group Recognition Status’ whilst they seek sanctuary in the United Kingdom given the plight of minorities in Pakistan. Our recommendations will be part of the comprehensive report compiled by the All Party Parliamentary Group on International Religious Freedom and Belief (APPG).

Whilst GMA recognises that Pakistan as with all signatories, have a general reservation to interpret the ICESCR Covenant within the framework of their own constitution, (ICESCR Art 2 para.1 of the covenant) (UN.24 of the Reservations- CESCR General comment 3. 1990) GMA believes that any reservation held should not take precedence to the behest of human suffering or human life).

(AK & SK Christians: risk ) 2014  was an appeals case involving the appellants, a brother and sister (both of whom are Christian, and of Pakistani origin) they initially entered the UK on study visas but later applied for asylum on the basis of religious persecution.  The case highlighted the question as to whether or not Pakistani Christians in general were at serious risk of persecution and as such deserved international protection and group status for the purpose of claiming asylum.

In light of GMA’s Report in relation to AK & SK Christians at risk and the recent BBC Panorama Documentary on the “The Taliban Hunters” aired 14/12/15. I believe there is not only an urgent need for Governments in relation to their COI guidance to revisit the Pakistan Governments sufficiency of protection and ability to provide it but also to consider whether or not in the circumstances to adopt and incorporate these findings to the existing asylum procedure in favour of group recognition.

Click on the link below to read in full GMA’s recommendations on (AK&SK Christians: risk) 2014

Press Release for Immediate Use:

A mosque belonging to Ahmadis was attacked and torched by angry protestors in Jhelum, hours after a Ahmadiyya owned factory was torched over alleged blasphemy.

Global Minorities Alliance urges Pakistan government to ‘step up’ its effort to protect lives and properties of Ahmadiyya Muslim community who are often subject to persecution, harassment and victims of violence because of their faith.

The call was made after the reports made available to GMA that a chip board factory, owned by an Ahmadi, was set on fire in Jhelum. Chip board was being manufactured in the factory when some miscreant reportedly informed the local cleric that copies of Holy Quran had been delivered to the furnace. Thereafter, without any further enquiry, announcements were made on loudspeakers in mosques that Holy Quran had been desecrated in Ahmadis’ chip board factory.

A violent mob was formed through these provocative announcements, which surrounded the factory, pelted stones, caused damage and then set the factory on fire by the use of inflammable material. Law enforcement personnel arrived at the scene and rescued the people trapped in the factory. The fire has destroyed 70% of the factory while 8 vehicles parked inside were also severely damaged.

The spokesperson of the Ahmadiyya community expressed great anguish over this incident and said that a deliberate attempt had been made to burn Ahmadis alive by torching the factory under a plan. Someone pushed the vicious allegation of blasphemy for personal vendetta and animosity.

Last year on July 27, 2014 during Ramzan in Gujranwala three Ahmadi females were burnt alive by an enraged mob over baseless allegation of blasphemy of the Holy Ka‘ba. Subsequent investigations proved the allegation entirely false and a result of personal animosity. He said, “Every Ahmadi is mindful of the Sha‘air of Allah more than his life as they are part of his faith. We have been taught that, ‘those who honour the Quran are honoured in the heavens’.

According to the National Action Plan a ban on hateful speeches is little more than paperwork, as extremist elements are free to implement their hateful anti-Ahmadiyya agenda, he said. He demanded transparent investigation of the incident and swift action to bring the perpetrators to justice.

Global Minorities Alliance Director for Interfaith and Harmony, Mr Shahzad Khan said: ‘Pakistan government must take strict measures to stop hate speech propaganda by clerics who whip up hatred against members of other faiths, instead they must act to promote peace and understanding’.

Global Minorities Alliance in its recent meeting with All Party Parliamentary Group UK on International religious freedom and belief in London, described persecutory events as a ‘state failure’ which is unable to stop on-going violence against all minorities in Pakistan.

Correction: The mosque was attacked in Jhelum not in Lahore as previously stated. We apologise for the mistake. 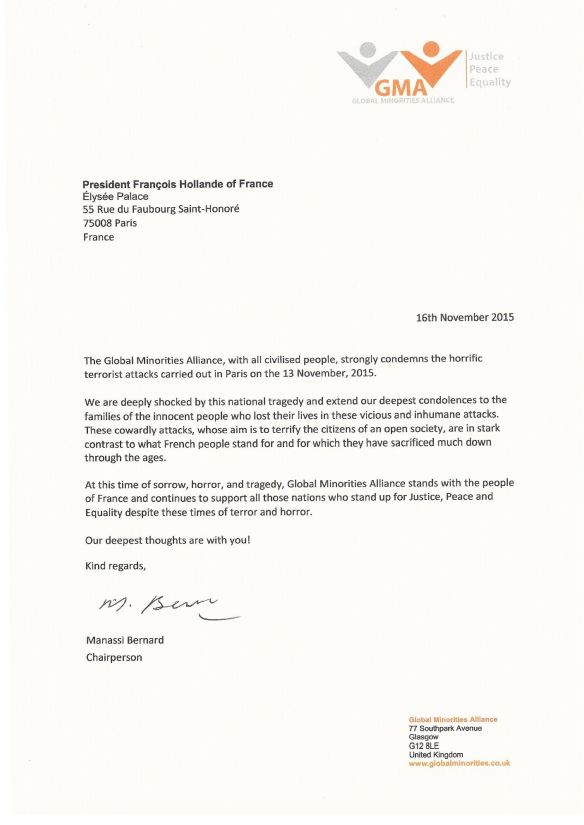