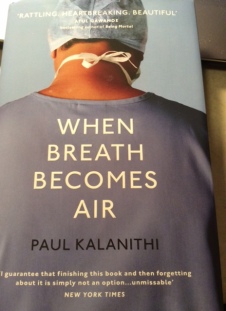 Paul Kalanithi: A man between Triumphs and Tragedies by Shahid Khan

Few weeks ago, I came across an extraordinary book titled ‘When Breath Becomes Air’ – a memoir of Dr Paul Kalanithi’s heart- wrenching and moving yet riveting account of his life, love, wisdom, hope and passion for human kind as well as his illustrious journey from being a young brilliant neuro- surgeon/scientist to a decaying patient with lung cancer.

The theme of this book struck me and I read it in two days amid moments of tears and sorrow, pride and praise for this person with whom I felt I have a connection – An inseparable human connection. The book shakes the very being of the reader as it offers a poignant whiff of realism, idealism, and bitter truths of life which we all human beings sooner or later encounter: The fragility of human life against the tick-tock of the clock. It leaves the reader with some optimism about life to pursue dreams but the book also provides an undertone impression of grim realities of life, yet inspiring and mind-blowing in its nature.

The book is divided in two parts. The first part is about Mr Kalanithi’s upbringing as a child born to Indian parents, events which shaped his life, his family home in Kingman, Arizona, and his attachment with his two brothers among his early childhood friends. Mr Kalanithi was the second youngest in his family. The qualities which later became so significant and dominant in his life were the product of younger years in his much loved family home environment. His love of literature and art and his life-long quest for ‘meaning of life’ were the product of the rich imagination he was born with. He was an avid reader of Sartre, Twain, Thoreau, and many more.  Later in his life he pursued his love for literature and studied English Literature, Human Biology, as well as History and Philosophy of Science at Stanford and Cambridge Universities. Part of his medical studies as followed a family tradition with his dad, uncle and elder brother being doctors. He would often ponder as how science and ‘meaning of life’ intersect in his life-long quest.  After his initial studies, he was admitted into Yale School of Medicine and later received the American Academy of Neurological Surgery’s highest award for his research. He recounts defining moments of life when providing best patient care helped several patients back to life and other moments where death became the final conqueror despite employing his medical acumen.  His love for science, philosophy, literature and overall for human life is the most distinguishing aspect of Mr Kalanithi’s character. However, he writes with remorse that the future he had built so tirelessly began to ‘evaporate’ as the reader moves on to the second half of his book.

The Second half of the book is about the inoperable lung cancer and Mr Kalanithi’s fight against it. The cancer began during his seven years long residency. It was heart-breaking to read that he became so frail that he was unable to attend his graduation due to his terminal illness. He still sought ‘meaning of life’ and pondered about questions which nagged while he led a life racing against time. The unfulfilled plans and half-baked holiday plans with the love of his life, Lucy, became distant dreams consumed by cancer before they could become a reality. Mr Kalanithi’s passion for love and literature never faded even on his last days on earth. He longed to compare himself with likes of T.S Eliot or the Bronte sisters and argued that he was of their ages but the only difference between him and them was that he did not publish anything as yet. He believed that life was a journey where some begin to live longer while others do not. He argued that ‘words and memory have longevity I do not’. When he realised that he had not much time to left he devoted the remainder of his life to write this extra-ordinary book ‘When Breath Becomes Air’.  After much contemplation, both Paul and Lucy decided to have a child who was named Elizabeth Acadia, Cady, to whom the book has been dedicated. Paul believed that he may not live long enough to see their daughter grow but that she may learn about him through his book. The abrupt end to the second half of the page reveal the real reflection of Paul’s deteriorating health. Paul Kalanithi died on 9th March 2015.

‘When Breath Becomes Air’ commemorates the life of an extraordinary young man, filled with passion, ambition, hope, hard work and a thoughtful mind who achieved so much in his short life. For many it would take double his life to achieve what he achieved. Additionally, the foreword by Abraham Verghese and Lucy’s epilogue add understanding to whole events of Mr Kalanithi’s life.

This is a must read book for all who love life, family and want to make their lives ‘well worth for others’. It may not have all the answers you need on whatever journey you are in your life. Nevertheless, it for sure, has a burning flame to rekindle the candle of your life. It will be an emotional roller coaster, you will love and you will hate it but I promise this human life will touch the cockles of your heart.

Thank to Lucy Kalanithi for making it possible to publish and ‘share’ the life of her extraordinary husband through this book and for the entire Kalanithi clan for raising such a brilliant human being – Paul Kalanithi.

Shahid Khan is the vice-chairperson of Glasgow based human rights organisation, Global Minorities Alliance (www.globalminorities.co.uk) He can be reached via twitter @shahidshabaz