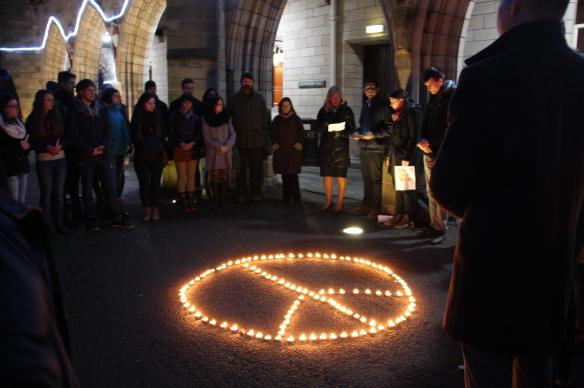 A vigil held in Aberdeen on Friday (23 January) called for worldwide peace following the recent atrocities in Paris, Pakistan and Nigeria.

The vigil, organised by human rights charity Global Minorities Alliance and held at Aberdeen University, was attended by around 100 people who lit candles and stood in solidarity to remember the victims of the massacres at the Charlie Hebdo headquarters and the Kosher supermarket (17 dead), the school in Peshawar (around 150 dead), and the town of Baga (around 2,000 dead). The vigil called for peace, freedom and tolerance. 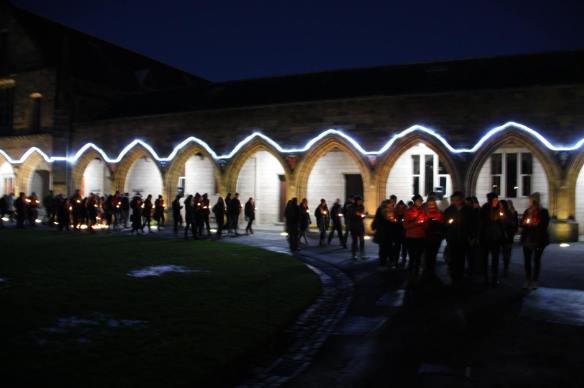 “There is no denying the fact that freedom is value to be cherished; it is not a right to abuse,” Shahid Khan told the assembled crowd.

“We condemn attacks on religious places to justify violence. More than 26 mosques have been attacked in Paris, several churches in Niger have been set on fire, and people have been burnt. According to Jewish Community Security Trust ,last year in July alone there were 302 attacks reported on Jewish places of worship.

“We also remember prisoners of conscience, journalists attacked and imprisoned in many parts of the world and call for their release. Raif Badawi from Saudia Arabia and Aasia Bibi, a blasphemy accused on death row in Pakistan, are two examples.

“As students in Aberdeen we call for all communities here in the UK and abroad for peace and reconciliation so that we can live together and to provide a better and safer future to next generations.

“Here in Aberdeen University, where were world meets together, people from different cultures, countries, race, and religion is an opportunity for all students to learn more about each other and to share these values when we go to work with communities around the world.

“May we continue to work together to make a difference in the lives of others.” 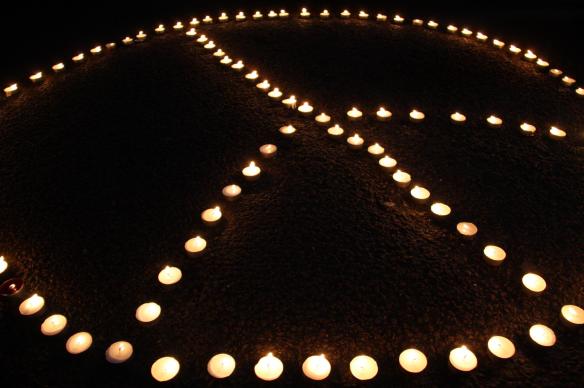 “The vigil represented a gathering of distinct individuals of differing nationalities, those without faith and those of different faiths standing together in remembrance of all those faced with violence for simply holding different views and values,” said Dr May. “We stood in respect, for not just those whose names appear in the media, but for all whose voices and stories may never be told.

“Our vigil was not to display our common values as much as to display our respect for our differences. Our candles demonstrated that small flickers of light will still glow despite the surrounding dark and that the language of violence and exclusion would be overshadowed by a resolute determination to uphold the language of inclusion and respect for human dignity and life.”

Caroline Inglis, who attended the vigil to represent the Vice-Chancellor and Principal of the University, urged people not to feel fearful when visiting common places of worship, and highlighted the importance of peaceful co-existence.

Global Minorities Alliance’s vigil is part of their ongoing focus on freedom of religion and freedom of speech. An example of this is their awareness raising campaign for Aasia Bibi, a Christian mother of five who was sentenced to death for ‘blasphemy’ in Pakistan – go to www.globalminorities.co.uk/gma-campaigns/freeaasia for more information.