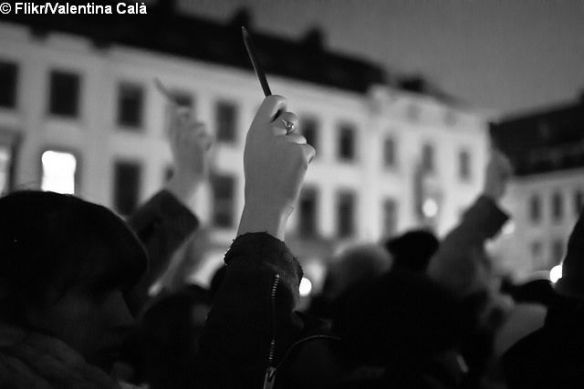 This week’s 9/11-style attack on France has sent shockwaves through the nation and the entire world, as terrorists murdered 17 people in coordinated assaults in Paris both in the offices of satirical magazine and at a Jewish Kosher supermarket.

Among the dead are some of France’s top cartoonists at Charlie Hebdo, which lampoons all religions and which has been regarded as the last true heir of the French revolutionary and republican traditions.

There has been an outpouring of solidarity and sympathy from all corners of the world for the victims, both on social media as well as in central Paris where more than 100,000 people gathered on Wednesday night to express their defiance. This is a prime example of resilience in the face of this blatant attack on freedom and democracy, which the French nation is privileged to promote. Vigils and moments of silence across the world have been organised in the memory of those who died.

The global responses against such terror remind us of the preciousness of freedom of expression, journalism, democracy, and open society which make up the fabric of the Western world. This is under attack, and it calls for global unity against evil forces who want to control, rob and kill us with their vitriolic ideologies. For such elements there is a no space in a civilised, liberal and democratic society, where a culture of tolerance and peaceful co-existence is so important.

We all are in this

When terror attacks happen anywhere in the world, It is indeed difficult to fathom the trauma, agony and pain felt by the people which, more often than not, results in some sort of backlash; the attacks on French mosques in the wake of Charlie Hebdo is a case in point. This further leads to stigmatisation and isolationism of a particular religion which, at the end, is the breeding ground for any fundamentalist ideology. Terror has no religion. The very thing terrorists want to achieve is to wedge gaps between religions and communities, which fractures interfaith harmony and promotes a culture of hate.

It goes without saying that we are all in this, as the onus lies with the general public as well as with the state as to how we respond to these terror attacks. The French public demonstrated it through their supportive vigils and peaceful assembly, standing alongside the police and security agencies. Similarly, during the #SydneySiege people offered lifts to Muslims for the fear of targeted attacks, and the Twitter hashtag #iIlridewithyou is a great example of ‘togetherness’ during these national tragedies.

So our societal attitude determines the failure and success of these terror attacks. The fact that people from all faith backgrounds, journalists, activists and the wider public posted pictures of themselves holding placards stating #JeSuisCharlie is testament to a lesson learnt from these terror attacks. Around 3.4 million tweets were posted with the hashtag #JeSuisCharlie, and Muslims posted pictures on social media with the hashtag #NotInMyName to condemn these terror attacks on peaceful citizens and denounce the terrorist who try to hijack the name of ‘Islam’.

We do not give in

We must not bow down to the evil which lurks around our neighbourhoods and attacks our liberty, unity and justice, to try and push us back into the dark ages where liberty is faced with death and violence.

We must not cower in the face of propaganda, beheadings, kidnappings, and terrorist attacks being plotted around the world. We must learn to defend the values of love, hope and dignity, and promote understanding across society rather than preaching supremacy and hatred against fellow human beings.

“I am extremely angry. These are criminals, barbarians. They have sold their soul to hell. This is not freedom. This is not Islam and I hope the French will come out united in the end of this.”

It is indeed disturbing when some Muslim leaders try to justify such atrocities under a pretext of one point or another. The sanctity of a human life and dignity is what everyone, regardless of their background, should stand up for.

While answering a phone caller who attempted to justify the murders during his weekly radio programme, Deputy Prime Minister Nick Clegg disagreed categorically:

The freedom and unity of our people is more precious and is a lethal offensive against any form of terrorism anywhere in the world. We must learn the spirit of resilience, unity and freedom of the French nation which has been exhibited both through media, on the streets of Paris, and across the country.

#CharlieHebdo is set to publish one million copies of its next issue on Wednesday. One of its writers, Patrick Pelloux, who was not present at the time of shooting said in a tearful appearance on a French TV iTele:

“We will not stop; freedom of the press and thought must continue.”

Tributes from all over the world continue to pour in as Paris sought the sigh of relief after three of the terrorists were killed earlier today. The city is also preparing for a solidarity march today (Sunday), which is expected to attract up to a million people.

Closer to home here in Glasgow the City Council raised the French flag over the town hall at half mast to show solidarity with the French people in mourning.

Three days of horrific terror gripped France but now, bloodied but undefeated, it can declared this message loud and clear to the entire world:

“Freedom of expression is indeed one of the strongest pillars of any liberal democratic country. The murder of freedom is a slavery of the dark ages. We have already given many lives for liberty, unity and justice through centuries and we continue to defend and promote these timeless values at all cost for a better and safer tomorrow.”