In 2012, 30-year-old Saudi Arabian blogger Raif Badawi was arrested for starting a progressive website that called for, among other things, religious tolerance and women’s rights. That was insulting to Islam, said his critics. In May 2014 Mr. Badawi was sentenced 10 years and was also sentenced to 1,000 lashes and ordered to pay a fine of 1 million riyals ($266,000; £133,000). At present, Mr Badawi is in a cell in a Jeddah prison, six months into his ten-year jail sentence. He is awaiting the first of his floggings. The thousand lashes are due to be dealt to him in batches of fifty, every Friday, in a public square. Reporters Without Borders awards the annual Netizen Prize in recognition to an Internet user, blogger, cyber-dissident, or group who has made a notable contribution to the defense of online freedom of expression. 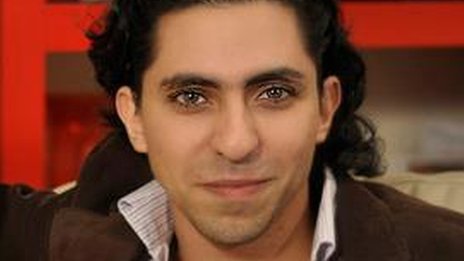 This is the speech of Dr. Elham Manea after receiving the prize on Raif Badawi’s behalf.

Thank you ladies and gentleman. I am honoured to be here on behalf of Raif Badawi and his wife, activist Ensaf Haidar.

Let me first start with the message of Ensaf Haidar, the wife of Raif Badawi, who has been leading the international campaign for his release.

“It is a pity that I can not be here with you today. In fact, I wish I were here with you now. That said; I was thrilled to hear the news about your decision to award Raif Badawi the Netizen Prize for the year 2014. On behalf of Raif Badawi, our three children, and me, I take this opportunity to thank Reporters without Borders for its essential support for the freedom of expression and opinion. Your Prize does not only give us moral support, it highlights how the fight for the freedom of expression is a difficult and painful quest- not only in Saudi Arabia but worldwide – a quest that needs this type of international support. Thank you for this award.” (Ensaf Haidar, wife of Raif Badawi)

It is demanded simply because it is the building block for any transparent, open and democratic system.

We need it for our own protection.

Without it, governments can violate their citizens’ rights with impunity, religious establishment can force its critics into silence, and powerful actors in society can abuse their power with no consequence.

It is the conscious of any society.

Some countries, such as Saudi Arabia, Iran and Russia, claim that freedom of expression should be curtailed in the name of culture, tradition and/or religion. In fact, they use religion to hide their lack of legitimacy and authoritarian style of governance. Culture and religion are only their pretext to violate human rights with impunity.

Because of that, Raif Badawi is a symbol. A symbol for all those imprisoned in the Kingdom and the MENA region for expressing their opinions peacefully.

Just pause for a moment and consider this figure: It is estimated that in the Gulf region alone approximately 40 000 prisoners of conscious are in jail. Among them is Raif’s lawyer, Human rights defender Waleed Abulkhair; he is serving a 15 years jail term for his defence of human rights and political reforms demands. Among them is Souad Alshammary, a vocal women’s rights activist, co-founder (with Raif Badawi) of the Saudi Liberal Network, and courageous critique of the power of religious clergy in the Kingdom.  She was arrested last week for defamation of Islam!

The Netzen Prize came at a time we needed it. It tells Raif’s children that their father did not break any law when he used the free space of the Internet to express his liberal opinions and voice his concerns about the role of the religious establishment in Saudi Arabia. It tells them that their father is among the few who dared to demand reform in Saudi Arabia through peaceful means. He is paying a high price for his courage.

On behalf of Raif badawi, his wife activist Ensaf Haidar, his three children and the international campaign for Raif’s release, we stand peacefully and respectfully to appeal to Saudi Arabia today and demand the release of Raif Badawi and the drop of all charges against him. It is time that justice is served.

See the video link of the speech here: http://goo.gl/nVgu9B

Dr. Elham Manea
Dr. Elham Manea is an associate professor of Politics at Zurich University, a writer and a human rights activist.
She tweets @ElhamManea