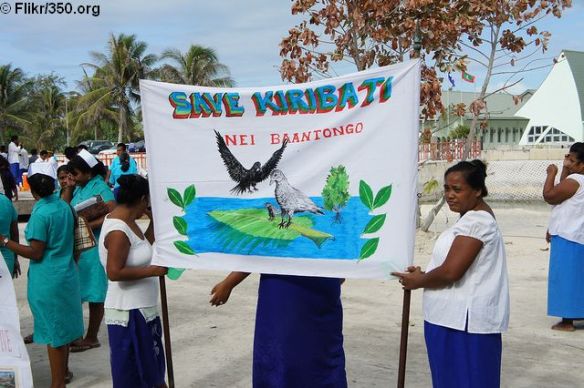 Kiribati is the ﬁrst state which has been forced to prepare plans for the evacuation of the whole nation due to climate change.

The state consists of 33 islands and its habitable area is on average three metres above sea-level. Due to climate change, permanent ice sheets will melt and heat will be taken up by the oceans and thus sea levels will rise by around 1.00 to 1.24 metres by the end of this century. If a certain temperature threshold is crossed, the complete Greenland ice sheets could melt and sea level rises of up to seven metres over a millennium are possible. This will cause serious harm to countries like Kiribati, which is now preparing to escape future harm.

The Kiribati case shows that climate change is already happening, with a serious human rights impact both now and in the future. As well as sea level rise, climate change will lead to higher temperatures in the mid-latitudes, more intense and more frequent extreme weather events like storms, and changed precipitation patterns. Storms and heatwaves have already killed many thousands of people, like in Paris, England and Wales during a heatwave in 2003 and in Venezuela in 1999 due to a storm.

Flooding also destroys many lives in coastal areas, for example in Bangladesh. These areas are mostly occupied by poor people with limited ability to adapt. Heatwaves and storms will also increase the number of people suffering from a range of climate-sensitive diseases. This increases the costs of healthcare systems in many countries.

The risk of hunger also increases with rising temperatures. For example, in the book Avoiding Dangerous Climate Change, Hare states that 45-55 million people will be at risk of hunger with a temperature increase of 2.5◦C by 2080, and even 65–75 million with a 3◦C increase. These examples show the serious impact climate change already has had.

This impact arise from man-made climate change; that is, human activities causing high emissions of CO2 and other greenhouse gases. Thus, climate change is not a natural phenomenon. Secondly, climate change is characterised by a dispersion of causes and eﬀects of both space and time; therefore the eﬀects of high emission activities are felt elsewhere in the world to where they occured. Due to the longevity of CO2 the eﬀects of these activities can also materialise a long time after emission. In addition, it is nearly impossible to identify the individuals whose emissions have caused this or that speciﬁc eﬀect.

Since culture forms a crucial part of our personality, humans might also have a right to a cultural life, which has possibly been violated in the Kiribati case. According to Caney, in general the basic nature of human rights is to ‘specify the minimum thresholds to which all individuals are entitled, simply by virtue of their humanity, and which override all other moral values’. This deﬁnition refers to at least four components of human rights: humanity, moral thresholds, universal protection and liberty/equality. Following this understanding, each person has rights simply because they are humans. These rights deﬁne certain thresholds under which people should not fall (moral thresholds) and which are to be protected (universal protection) with priority over any other value like, for example, eﬃciency.

In addition to these protecting components, human rights establish a relationship between the individual which is protected by its rights and the individual that has to respect these rights and thus has the duty to act appropriately. Assuming that human beings will exist for sure in the future and that potentially bad eﬀects of our actions materialise in the (very) distant future, human rights of future individuals and thus future generations will be threatened as well – and even worse.

Therefore, strong and immediate action is needed to protect from harm both existing and future individuals through constitutional changes and precautionary principles.