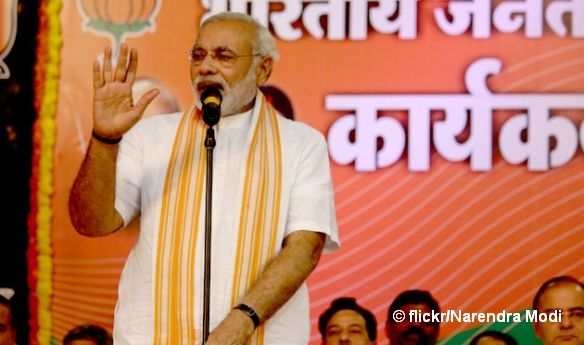 One of the first steps the Bharatiya Janata Party (BJP) is doing after new Indian prime minister Narendra Modi’s swearing in ceremony (if you ignore the telling off given to Pakistan prime minister Nawaz Sharif that India expected steps to be taken by the latter against ‘terrorist groups’) is to move to repealing of Article 370 of the Constitution of India, which grants special autonomous status to Jammu and Kashmir.

Coming hot on heels of two unsavoury incidents, this was not a very auspicious beginning. First, reported a day before Modi’s swearing in was the news of a protest by Rashtriya Hindu Andolan, a Hindu nationalist group, to ban Fajr Azaan Sanatan Sanstha activist Vijayalakshmi. This protest was a cry that India grants equal religious freedom to all; however, this must not mean followers of one religion disturbing the peace of the followers of other religions.

In yet another incident, Hindus and Muslims clashed a day ahead of Modi’s swearing in at Ahmedabad, known as the heartland of Gujrat; Modi’s home town. A car accident between members of Muslim and Hindu communities led to an argument. More community members joined in. The altercation led to destruction, and the ensuing fire destroyed three shops, one mini-bus and a couple of other vehicles.

In a rewind – a news report by Times of India about the 2002 communal violence in Godhra in Gujarat. The headline screams, ‘Top cop says Gujarat CM Narendra Modi involved in Godhra case.’ The report states:

“Senior IPS officer Sanjeev Bhatt, who was posted in the Intelligence Department, has filed an affidavit in the Supreme Court accusing Gujarat chief minister Narendra Modi of complicity in the 2002 Godhra case. Bhatt in his affidavit states that he was that he attended a meeting held at the chief minister’s residence on February 27, 2002. Stating that the senior police officials had blindly followed Modis instructions in 2002, the officer in his affidavit further stated that this was responsible for the deterioration in the law and order situation in the state…

“Bhatt has also made a request to the apex court to provide protection to him and his family. …Following the Godhra train burning incident, widespread communal riots broke out in various parts of Gujarat in which over 1,000 people, mostly from the minority community, were killed.” (Published 22 April 2011)

“But nobody who, like me, was in Modi’s state 12 years ago and witnessed the carnage that took the lives of hundreds of Muslims in bloody, brutal and tightly organised pogroms can suppress a shiver of horror at the thought that this man may now be about to join the world’s top table.”

The message being conveyed to the Indian Muslims, Indian Hindus and other religious groups residing in India and flexing their muscles is clear: Hindutva (Hindu nationalism) reigns supreme. This in turn will create extreme discomfort amongst other countries of the religion. No one wants a pushing, power hungry, religious driven neighbour – or do they?

Under the National Minorities Commission Act 1992, the religious groups to be awarded minority status are Christians, Sikhs, Muslims, Parsis and Buddhists.

Published in Christian Today on 17 May 2014 CA Daniel, president of the National Congress of Indian Christians, said Christians are not safe under BJP rule. The report went on to state:

“Dr John Dayal, secretary general of the All India Christian Council, recalled the scale of devastation perpetrated by Hindu radical mobs when they went on the rampage in Kandhamal, Odisha, and Mangalore, Karnataka, in 2007 and 2008 killing over 120 Christians and Dalits. Over 300 churches and more than 6,000 Christian homes were destroyed in the attacks.”

Will Narendra Modi be able to steer the BJP clear of the heavy Hindutva baggage it carries? Can the BJP rise above religious politics to address India’s most important issue, the revival of its economy? Will he be able to change the image of the historical BJP politics? One hopes, for the sake of India and Indian minorities, that he is able to achieve this.

A heavy mandate lays upon his shoulders an equally heavy responsibility to do so. Whether he is able to deliver, time alone will tell.